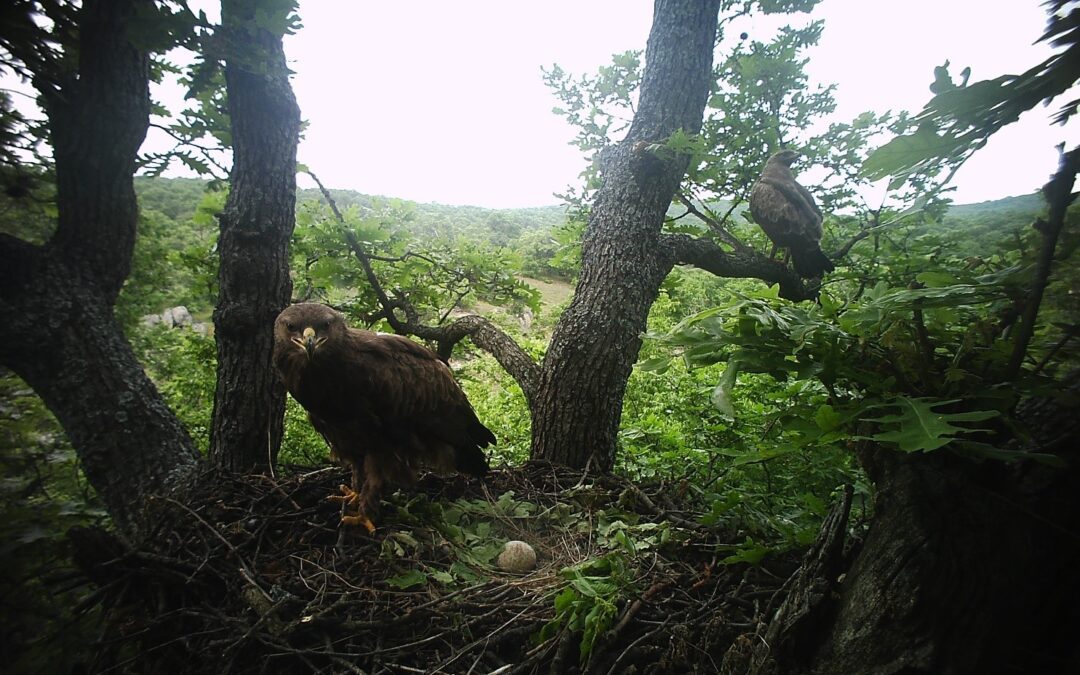 Trail cameras reveal interesting facts about the behavior and biology of the Lesser Spotted Eagle.

The results of the study show that the delivery of food for the hatchling is mainly done by the male bird. As the juvenile grows, the need for food increases, and the female becomes more and more actively involved in procuring it. During the eighth week of the young bird, a large increase in the average daily food supply is recorded. Lizards and voles are among the most common victims. The Lesser Spotted Eagle’s menu also includes various types of small vertebrates.

The analysis from the trail cameras has revealed interesting information about the parental tasks during the incubation period – incubation, food provision, and nest repair. The males are mainly responsible for nest construction and repair and food provision, females carry out incubation and feeding of the young.

Trail camera surveys are a non-invasive way to monitor wildlife populations. Although most commonly used to study medium and large mammal species, these devices can provide useful ecological information for some poorly studied bird species as well. The trail cameras are equipped with motion sensors and capture the birds in front of them without disturbing them. They are placed at a sufficient distance (usually 1.5 – 3 m) from the nest in the last days of March, before the arrival of the birds. For the period 2019-2021, trail cameras were placed in five nests and 141,985 photos were taken. Three of the photo traps were placed in the nests of Lesser Spotted Eagles in the “Zapadna Strandzha” Protected area, and two in the “Sakar” Protected area.

In the spring of 2022, for the first time, a trail camera was also installed in Northern Bulgaria – in the Protected zone “Suha Reka”.

The results of the study confirm the importance of protecting the habitats and the species of the food chain, ensuring a sufficient amount to feed the new generations of the Lesser Spotted Eagle. In the future, these results can be successfully combined with data from GPS transmitters on the movements, migration, nesting phenology, and behavior of the Lesser Spotted Eagles and make a comprehensive spatial study of the species. This will help to identify most of the significant problems and threats to the species and subsequently implement specific conservation measures.

The installation of the trail cameras is part of the activities under the LIFE project “LIFE for Eagle’s habitats”.