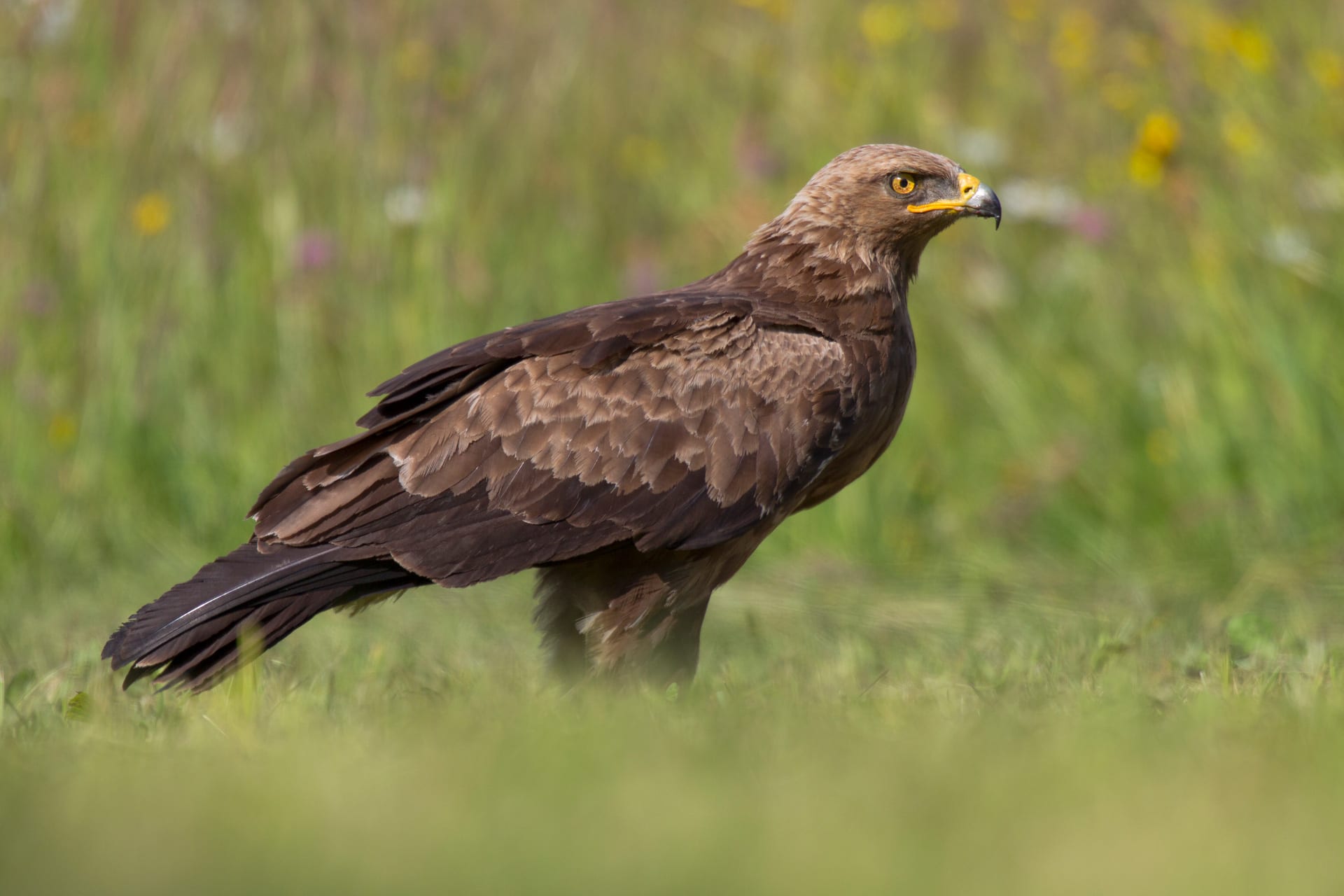 Age dimorphism is present. Adult birds have brown plumage. They can be distinguished with difficulty from adult greater spotted eagles by their slightly smaller bodies and by the fact that, during flight, the flight feathers on the underside are black, while the underwings are brown (on the greater spotted eagle, it is reversed).

The juveniles are chocolate brown with a prominent yellow patch on their necks and have an upperwing with two rows of white patches, a distinguishing marking that differentiates them from the juveniles of the greater spotted eagle. Its body is mottled underneath with light-colored streaks. Calls: During breeding season it often makes a shrill “vee-yeek, vee-ee-eek,” and during other seasons a repetitive screech, “keeye-keeye,” resembling a small dog’s yip.

Breeds in Europe and Asia, winters in Africa. It is a typical “long distance migrant,” as individuals from the northern part of the population travel almost 10,000 km to reach their wintering grounds. They winter south of the equator. The lesser spotted eagle’s nesting ground is from the Elbe River valley to Belarus and the regions near Saint Petersburg in Russia, Hungary, Slovakia, the Baltics, the Balkan peninsula, Asia Minor, the Caucasus, and northern Iran. 95% of the population of the species is distributed within Europe. The species’ nesting population is estimated between 14000-19000 pairs (BirdLife 2014). Their migration route passes through the Gulf of Burgas, the Bosporus, and the Gulf of Aqaba. During their migration, the birds stop in certain places along their long migration route to rest and recover their strength.

In Bulgaria they can be found in higher numbers in the Dervent Heights, Sakar, the western foothills of Strandzha, the lower and middle sections of the Tundzha River, the eastern Balkan Mountains and the eastern Rhodopes. More diffuse populations can be found in Dobruja, the Danubian plane, the Thracian plane, the western Rhodopes, Sredna Gora, Vitosha, Plana, etc. On Sakar Mountain and the neighboring Dervent Heights, the population is seeing a slight increase, while in Strandzha it is decreasing as a result of the degradation of its feeding habitats, seen most clearly in the overgrowth of open territories because of socio-economic changes that have taken place in the region. The nesting population of the lesser spotted eagle in Bulgaria is estimated to be more than 600 pairs.

Biology and Ecology of the Species

The lesser spotted eagle inhabits temperate broadleaf and mixed forests near open spaces, mainly pastures, meadows, cultivated fields, and reservoirs. It prefers a mosaic habitat. During migration they form small flocks, at times up to several dozens of individuals, in mixed groups of buzzards, kites, and other types of eagles.

It feeds primarily on small mammals, mainly voles and other prey of similar size, made up of various kinds of rodents, amphibians, reptiles, small birds, and insects. In Sakar, pairs feed on hedgehogs, a feeding adaptation in the species.

The species is monogamous. The birds build their nests on tall trees. They lay 1-3 (most often 2) eggs, 63×53 mm in size, that both parents incubate over a period of around 33-43 days. The young leave the nest at around 49-56 days old. Every year they raise one small hatchling, and in exceptionally rare cases, two. 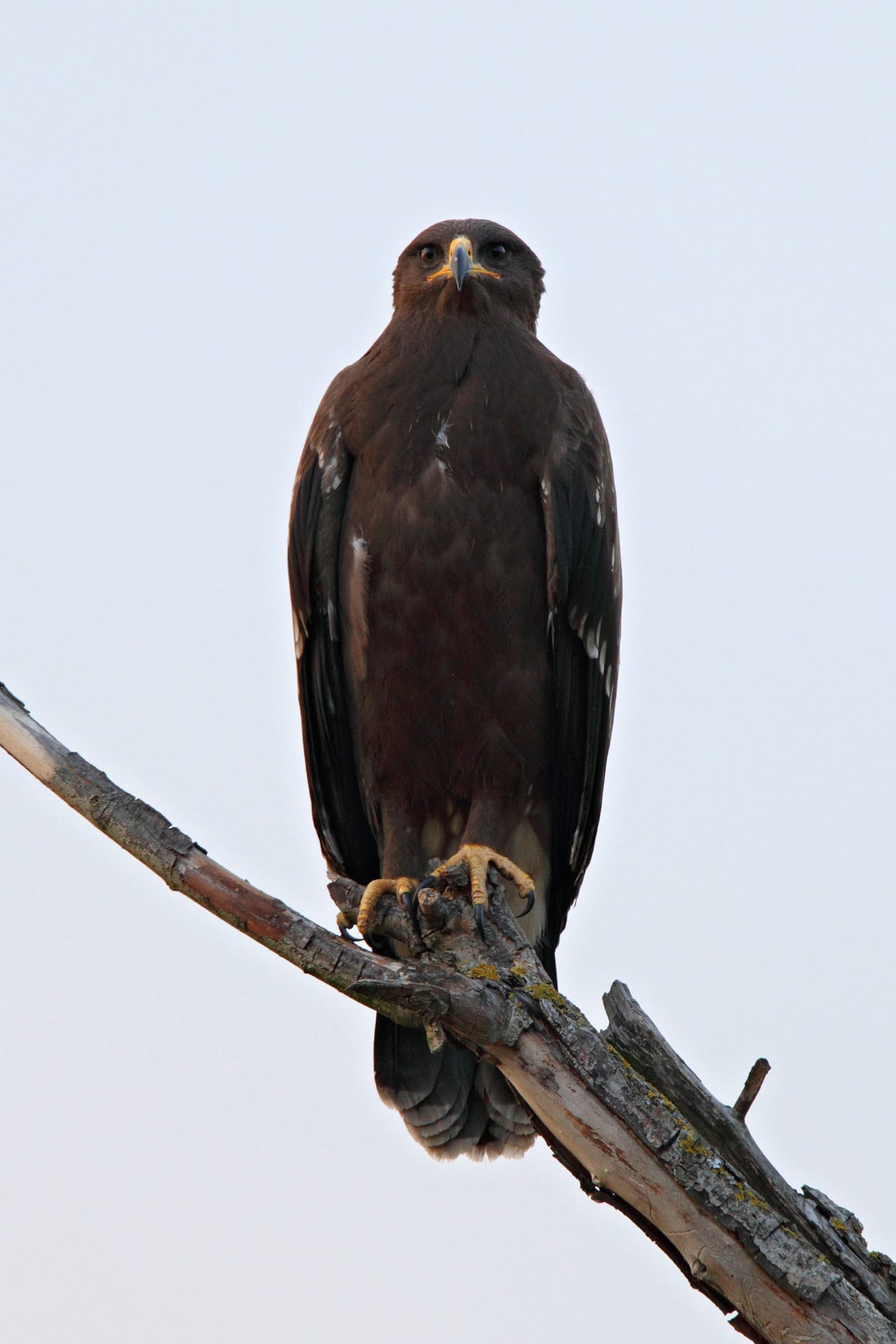 Changes in habitats as a result of intensive forestry

Clearing of old growth forests, selective clearing of old trees, and afforestation of pastureland is leading to the destruction of the lesser spotted eagle’s breeding and feeding habitats.

Forest service activity near the nests of lesser spotted eagles during their breeding period can become a compromising factor in the birds’ nesting. Tourists and mushroom or herb gatherers also can also be a reason for a pair of eagles to abandon their nest.

Intensive farming, associated with the use of many pesticides and the introduction of monocultures, is leading to the reduction of the types of animals on which the lesser spotted eagle feeds. A new threat is also posed by the use of shredders for clearing bushes from pastureland, which is both harming its habitat and is also leading directly to the extermination of the animals that make up its main prey.

Fires can directly destroy habitable nests. As a result of global climate change, fires are an ever-growing threat for the regions important for the lesser spotted eagle.