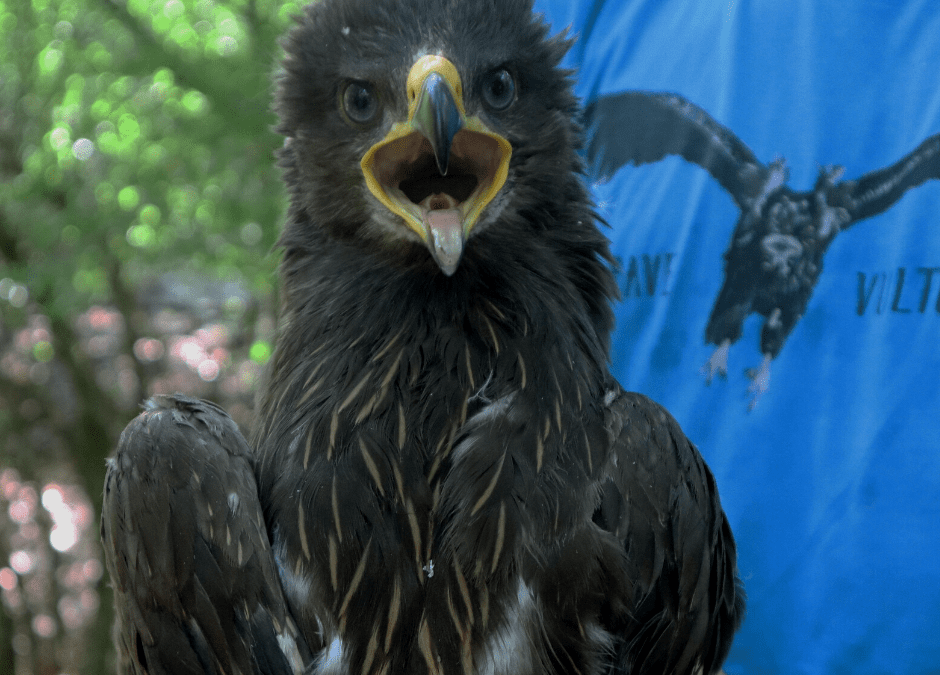 For the first time, satellite transmitters were placed on three juvenile Lesser Spotted Eagles hatched in nests in Bulgaria. So far, Imperial Eagles, Egyptian and Griffon Vultures, White-tailed Eagles and Red-breasted Geese have been tagged with GSM transmitters in the country.

The transmitters were fitted on three juvenile Lesser Spotted Eagles. The selection was made by specialists studying the species in the country, based on the assumed age of the birds, the expectation to leave the nest within 10 days after the tagging, and the accessibility of the nests where the young birds are located.

The three Lesser Spotted Eagles with GSM transmitters are named Kubrat, Tervel and Boyana. During the tagging, the males were calmer, while the Boyana, which due to its greater weight is assumed to be female, was very anxious and caused difficulties to the team placing the transmitter. The nests of the tagged Lesser Spotted Eagles are in three protected sites of the Natura 2000 network – “Sakar”, “Derventski vazvishenia ” and “Zapadna Strandzha”.

The placement of the transmitters was carried out by a team of the Bulgarian Society for the Protection of Birds in the presence of representatives of the Executive Forest Agency, the Southeast State Company and the State Forest Enterprise – Kosti.

The installed GSM transmitters weigh less than 3% of the eagles’ body weight and are attached to the birds by means of Teflon straps. The transmitter is attached loosely so as not to cause inconvenience to the bird, but at the same time to ensure that it will not fall off or be removed by the eagles. Tagged birds very quickly get used to the transmitters and can carry out their daily activities without problems.

Before being tagged this year’s Lesser Spotted Eagles were safely removed from their nests. Immediately afterwards, their weight was measured, and samples were taken for DNA analysis, which will certainly show the sex of the tagged birds. Special measurements of wingspan, head, leg and tail length were also taken. Thus, the species is being studied and information is being gathered that is important for its future conservation.

The placement of satellite transmitters on Lesser Spotted Eagles will allow to study the species in more depth and specifically obtain more detailed information about its migration route, preferred resting places during its long migration route, temporary habitats and many other important events in the life of Lesser Spotted Eagles. Tracking eagles by satellite telemetry will also serve for something much more important, namely the identification of threats and causes of mortality in birds during migration.

For two breeding seasons, this year and next, 10 juvenile Lesser Spotted Eagles will be tagged.

The fitting of the satellite transmitters is carried out within the project “Conservation Measures for the Lesser Spotted Eagle and its habitats in Bulgaria” under the EU LIFE Programme, implemented by the Executive Forest Agency, the Southeast and Northeast State Companies and the Bulgarian Society for the Protection of Birds.