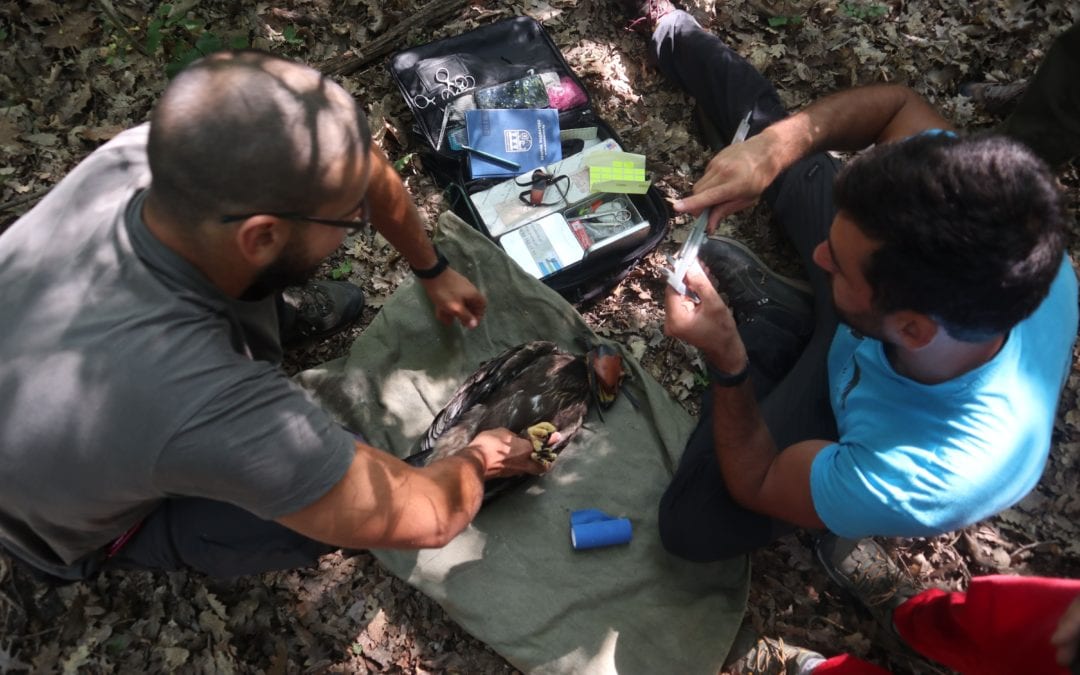 In the last days of July, a team from the Bulgarian Society for the Protection of Birds fitted three young birds with GSM transmitters, expecting to learn more about the species’ migration. The tagging of the juvenile Lesser Spotted Eagles took place days before the birds left their nests. For a month, the young eagles, along with the adult birds, stayed in the nest area, learning to hunt and fly. A month later they were on their migration route.

The placement of transmitters on juvenile Lesser Spotted Eagles hatched in Bulgaria is being done for the first time and the information currently being collected is new to experts working for the conservation of the species. In future, they will have more information about the species’ migration route, how long the birds need to fly to their wintering grounds and how long they stay there. They are also going to find out which places the birds use for resting during migration.

The Lesser Spotted Eagle population located north from Bulgaria has been previously studied and more is known about it than about the Bulgarian population.

Where each of the three Lesser Spotted Eagles flies

One of the tagged Lesser Spotted Eagles flies along the classic raptor flyway, the Dardanelles. It is now known to have initially flown over Tundzha and Maritsa river valleys, passing over Bursa and Izmir to reach Antalya. This is the Lesser Spotted Eagle hatched in the protected site “Derventski vazvishenia”.

The other eagle, hatched in “Zapadna Strandzha” protected site, has crossed the Bosphorus, flying directly over European Turkey. It is currently on its way to Konya.

The third Lesser Spotted Eagle, which was also the most non-collaborative at the time the transmitter was placed, is now near Istanbul. It started its migration a day later than the other two, but experts say the birds are likely to be reunited.

It is also assumed that the juvenile Lesser Spotted Eagles fly in sparse flocks of up to several dozen individuals with older birds because it is safer to get to the places where they will winter.