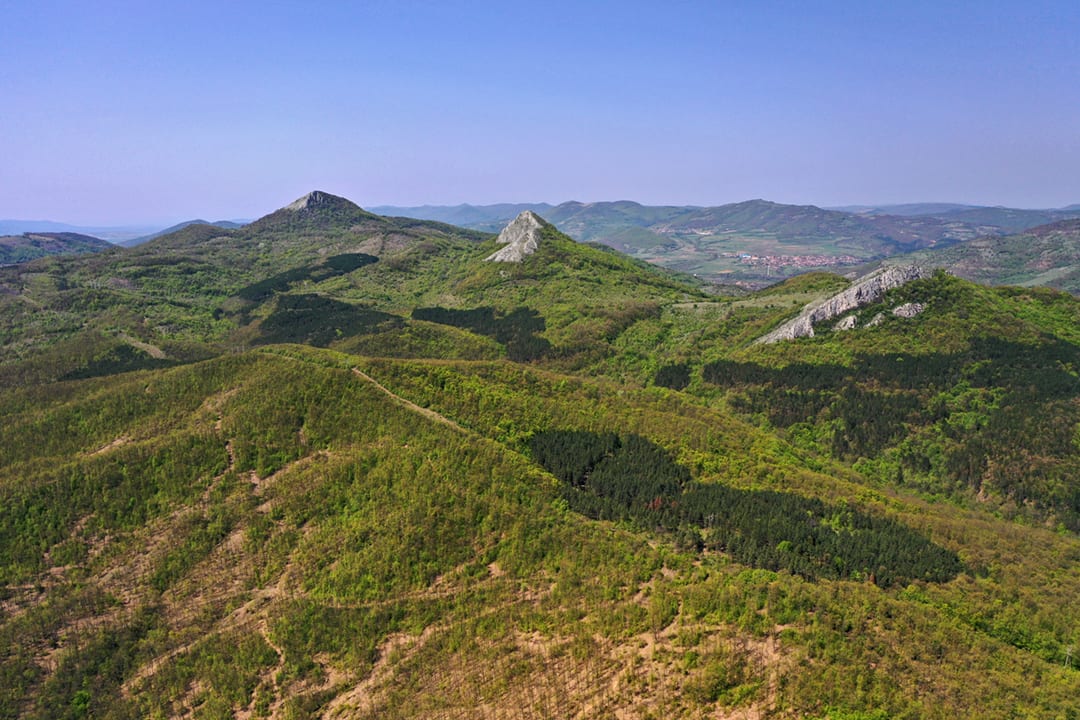 Kamchiyska planina forms the northern part of the easternmost share of the Balkan Mountain. On the east it borders on the Black Sea, on the north the Kamchia river valley, on the west and north-west it is limited by the Luda Kamchia River and on the south by the Dvoinitsa River and the saddle that separates it from Eminska Mountain. Its altitude is from 0 m at the seashore to 627 m a.s.l. in its western part (Kamenyak peak).

The main habitat is forest, represented by pure oak and beech forests and mixed broadleaved forests, dominated by Quercus cerris, Q. frainetto,Q. dalechampii, Fagus orientalis, F. sylvatica, and Tilia tomentosa. About 40% of the forests are coppice. Amidst the forest massifs and around the settlements there are dispersed agriculturalplots and meadows with xerothermal grass associations, with the prevalence of Dichantiumischaemum, Poa bulbosa, etc. (Bondev 1991).

The region of Kamchiyska planina supports 189 bird species, 47 of which are listed in the Red Data Book of Bulgaria. The area provides suitable habitats for 63 species, included in Annex 2 ofthe Biodiversity Act, which need special conservation measures, of which 56 are listed also in Annex I of the Birds Directive.

The SPA Kamchiyska planina is one of the most important sites in the country on a European Union scale for the conservation of the Lesser Spotted Eagle. Between 10–15 LSE pairs breed within the SPA proving existence of good feeding habitats. The SPA is one of the most valuable sites in the country at European and European Union scale forthe Lesser Spotted Eagle as a ‘bottleneck’ site where over 8000 individuals regularly pass onmigration.

Kamchiyska planina is located on the Via Pontica migration flyway and has international importance as a typical bottleneck migration site for the pelicans, storks and birds of prey that use it. Before crossing the Balkan Mountain, the migrating birds concentrate in the region, as it is the lowest part of the mountain and the easiest obstacle to overcome. The forest is used by the migrants – mainly birds of prey – as a roosting and feeding place.

The region of Tsonevo Reservoir is one of the few in Bulgaria where the Osprey breeds. Kamchiyska planina is also one of the most important areas in the country for the Honey Buzzard, Booted Eagle, Saker Falcon, Woodlark, Nightjar, Ortolan Bunting, Semi-collared Flycatcher, as well as for four species of woodpeckers – the Middle Spotted Woodpecker, Syrian Woodpecker, BlackWoodpecker and Grey Headed Woodpecker.

The reservoirs in the Kamchiyska planina hold significant numbers of waterbirds during the migration and winter as they use the wetlands on their way to southern wetlands. The globally threatened Dalmatian Pelican has been recorded to stay in that area during the winter. The site is one most important roosting area for migrating Red-footed Falcons.

Continuing urbanization and turning the grasslands to arable lands are the main reasons for fragmentationand habitats loss.

The main threats to LSE at the site are disturbance and degradation of breeding and trophic habitats as a result of development of inappropriate forest and agriculture practices due to lack of information on species habitat preference, among the stakeholders